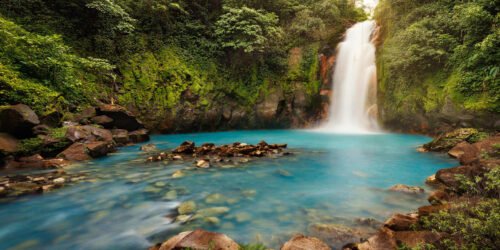 The beautiful beaches and nearby theme parks, waterfalls, volcanoes, wildlife attractions are within easy reach of Coco, Hermosa, and Ocotal. From mountain trails to exotic rivers and refuges, the biodiversity that Costa Rica is famous for will be showcased throughout.

Nothing will remind you that you’ve arrived in paradise than a forest walk that ends at a magically light blue or wildly cascading secret waterfall.

In the rainforest on the border of Guanacaste provinces and Alajuela province is the Rio Celeste or Celeste River. This is part of Costa Rica’s Tenorio Volcano National Park but stands up on its own.

The Rio Celeste looks like a magical river, a body of water flowing in the middle of a mysterious rainforest hiding its secrets underneath the blue waters.

If you’re planning to visit Tenorio Volcano National Park, don’t dare to miss this river and its magnificent sight. You can reach Rio Celeste by following a series of trails that allow you to see flora and fauna along the way.

A secret little waterfall that is loved by locals, ex-pats, and tourists alike. When viewed through the trees, the cascading downpour is almost dreamlike as it splashes into the expansive pool below.

What’s quirky about Llanos de Cortes is that so many people drive by this lovely oasis every single day without realizing it’s but a few-minute detour from the highway east of Liberia. The thick surrounding forest literally hides the waterfall in plain sight, but now that you know, you won’t miss it.

While the famous Arenal Volcano is located just outside of Guanacaste’s borders, you can still get a little taste of the lava within a reasonable drive from Playas del Coco.

Nothing beats hiking on a breezy day in Costa Rica, and the trails in the Rincon de la Vieja National Park can keep you busy all day long.

There are several hiking trails suited to different skill levels. The beginner’s trail spans roughly 1.5 kilometers (1 mile) and is quite easy to trek along while viewing boiling mud pots. Along the way, you might see some boiling lava and smell the hydrogen sulfide they emit.

The La Catarata La Cangreja trail is where the challenge starts. Spanning 4 kilometers (2.5 miles) long, it will take you up and down through a series of winding pathways on the face of a dry rainforest. Your feet might feel the burn, but your eyes will feast on the magnificent waterfall, that stands serene and proud in the heart of the forest.

At times, it can take a few monkeys gracefully playing in trees or a sloth giving you the wink to let you know the wildlife in Costa Rica, is truly wild. With a 90-minute drive of Playas del Coco, there are many parks and refuges to explore where you in walk into the living rooms of the country’s diverse ecosystem.

Costa Rica is also famous for its turtles namely the leatherback turtle, green turtle, hawksbill turtles, and ocean ridley turtles. To see the last of the turtles mentioned, go to Ostional Nature Reserve.

Ostional Nature reserve was established in 1984 to safeguard the continued existence of ocean ridleys. Not only it serves as a tourist spot where people can watch and interact with turtles, but it also serves as an institution that accommodates ocean ridleys about to lay eggs.

Book your visit here within the months of July through December. During these times, the Arribada takes place. This is when large groups of ocean ridleys go to the Ostional Wildlife Refuge to lay their eggs. It’s a spectacular sight to see this special time firsthand.

If you want to get the most of Arribada, contact a guide working in the Ostional Nature Reserve. He will be an asset that can teach you which months to best schedule your visit.

If wildlife is the reason you came to Guanacaste, you must visit Palo Verde where they safeguard soon-to-be-extinct and rare wildlife. The animals that are waiting for you to see are variegated squirrels, howler monkeys, white-nosed coatis, white wailed deers, and white-throated monkeys.

You can explore Palo Verde by following the trails that lead to different sections where wildlife is frequent. If you want a quicker mode of transport to explore Palo Verde, try the Palo Verde boat trip. The Tempisque spans 144 kilometers, and you ride along in your boat tour, you will be to see wildflowers and fauna, along with numerous iguanas, crocodiles, birds, monkeys, and other animals.

Exotic is the theme of Costa Rica. They also bring the African savannah feel right next to Playas del Coco. At just 35 minutes driving you embark on a safari adventure among zebras, giraffes, and antelopes, in the Africa Mia safari park. You can start a wildlife adventure even closer to the beach, in the Northern Guanacaste, surrounded by howler monkeys, coatimundis, and numerous noisy exotic birds.

If you’re missing that good ‘ole tourist experience with a mix of Costa Rican flavor added in, you’ll be happy to know there are few theme parks within a short drive of Coco.

An activity park for both kids and adults, the Diamante Adventure Park features their infamous Superman zipline where you can fly atop the treetops with your arms wide open. The ride is 1 kilometer long and takes you zooming past above the jungle canopy with a serene view of the ocean from afar.

Upon finishing your zipline descent, you will arrive at an animal shelter. Here you experience wildlife encounters, as you take photos of animals like jaguars, pumas, sloths, pumas, toucans, and other animals.

Then it’s a nice tranquil walk through the botanical garden as you gaze outward at gorgeous views of the Guanacaste coastline.  If you plan on staying at the Riu, it’s literally next door.

In a land of wonders, it’s no surprise that even nature will look to raise the bar and set the standard for what wonderful really means.

Surfers could not dream of a more enticing brew than the iconic Witch’s Rock seemingly creates out of thin air. The waves the break over this rock islet in the middle of the ocean bring out the dawn patrol and intermediate surfers while leaving the paddlepusses behind at the beach.

Located off the coast near the Santa Rosa National Park, it’s a 45-minutes boat ride from the shores of Playa del Coco with many boats do the trip daily. The waves here are generally not too big or difficult, but they do require some skill, and a strong leash, as there are no shallow waters in sight.