What are the top Milan tourist attractions? If you are in Milan for the first time, here are the monuments, churches, basilicas, galleries, museums, gardens, palaces, you shouldn’t miss visiting.

There are a hundred and one good reasons why you should decide to visit Milan. It won’t be difficult to make a list of top tourist attractions in Milan but this city hides a lot of the monuments or sights that many people haven’t heard about.

I really like those attractions that aren’t on the top choice but deserve to be listed as ‘must-see’. I’ll guide you all the way through this elegant city and its museums and galleries, as well as other historical places that you might like to visit.

In order to help you plan your stay in Milan, I’ve prepared a guide of top things to do and see in Milan. So, what to do in Milan?

In the heart of Milan 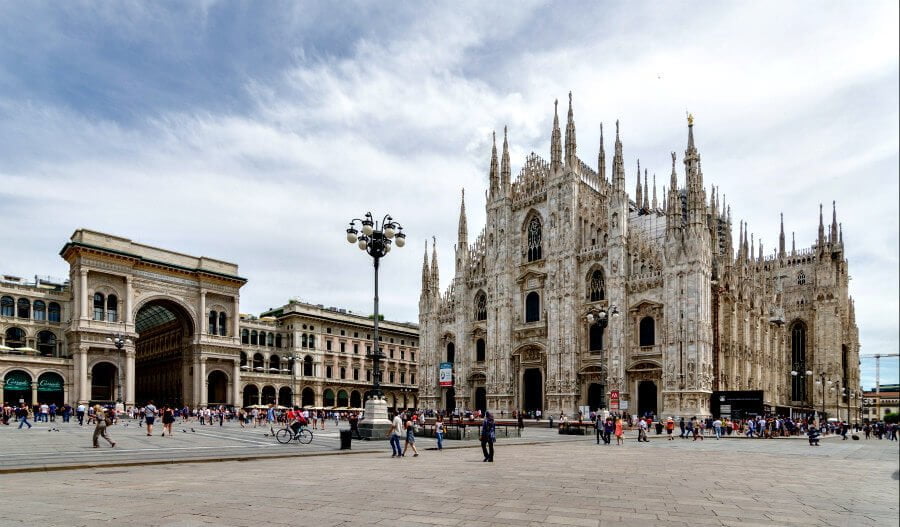 I won’t be wrong if I say that all things to do and to see once you arrive in Milan, will start right from this square – Piazza del Duomo. Nested right in the center of Milan this vivacious and vibrant square is most important piazza of Milan. It’s the commercial center of the city, a starting point of Milan tourist attractions and, with the beautiful Galleria Vittorio Emanuele , is the iconic place par excellence of Milan.

From this square you’ll have unique possibility to see the city from the highest point, feel the shopping fever, passing among exclusive shops under a spectacular glass-iron vault, or visiting a beautiful museum to finish with admiring the harmonious architecture that surrounds this square. It must be your first encounter with Milan.

Here are the 4 things to do and see from Piazza del Duomo in Milan: 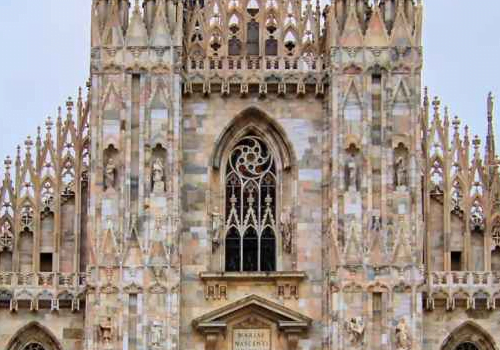 There is nothing more representative of Milan than its Duomo, the splendid Gothic Cathedral. It’s the symbol of the city and the first thing to see as soon as you set foot in Milan.

It was built in over five hundred years and has changed style at least three times. The first stone was laid by a duke of the Visconti dynasty in 1386.This imposing Cathedral with its pentagonal facade coated by Candoglia marble (from quarry on Lake Maggiore) deserves to be visited from inside including its basement. Read more about it on Wikipedia!

The golden Madonnina and the terraces 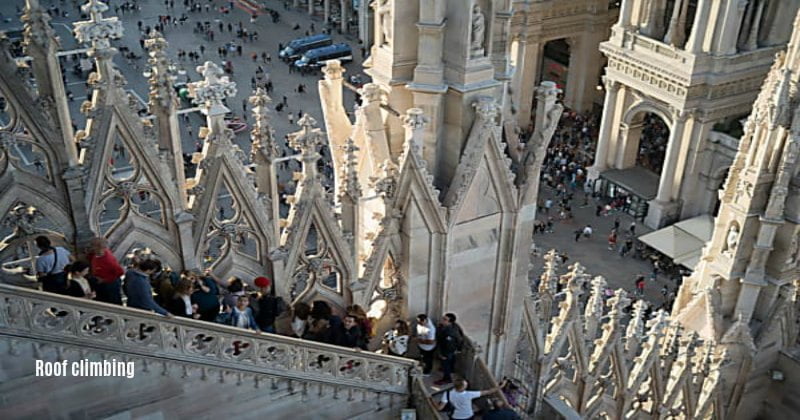 The terraces of the Duomo of Milan have always fascinated not only tourists but also the locals who, for one reason or another, pass through Piazza del Duomo.

It’s a unique emotion to climb up to the cathedral roof with the most spectacular view through the innumerable marble spires and pinnacles that adorn the rooftop. Admire the a gilded copper statue of the Madonnina (Little Madonna), the city’s traditional protector.

Climbing to the roof is one of the top Milan tourist attractions, everybody has to try. From the terraces of the Milan Cathedral it is possible to see the most important landmarks of the city 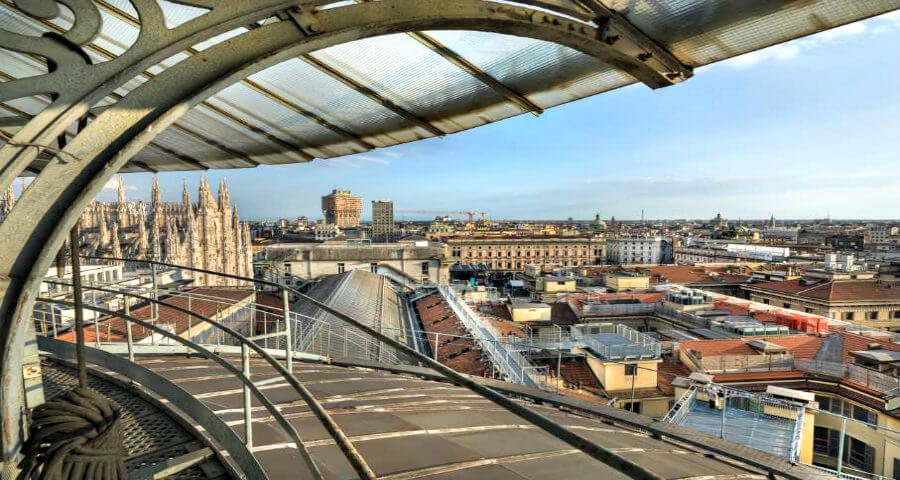 The famous Galleria Vittorio Emanuele II , which connects Piazza Duomo to Piazza della Scala is the most elegant part of the city with its famous shops and exclusive bars.

It’s usually called the living room of Milan’ with several designer shops of prestigious brands, that many considered as the natural beginning of the fashion quadrilateral.

Even here you can take a walk on the roof of the Gallery organized by Highline Galleria or for lovers of Italian cuisine famous Italian chefs Carlo Cracco has opened a new restaurant in Galleria.

Purchase your 48 hours Milan Pass and get free entrance walk on the rooftops of Gallery.

The Museo del Novecento, located inside the Palazzo dellArengario in Piazza del Duomo, hosts a collection of over four thousand works that gather in one place the best of 20th century Italian art.

The third-floor of the Museo del Novecento hosts the first class bistro with extraordinary views over the Duomo. If you can afford top-notch bistro dishes, including fish platters, truffles and game than take a table on the panoramic terrace to enjoy excellent views of the Duomo.

This top choice museum is included in 48 hours Milan pass! 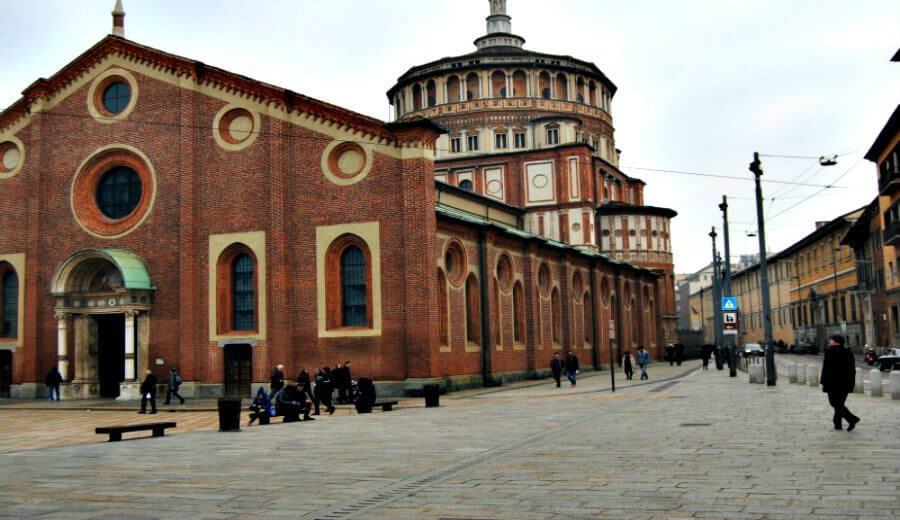 If you are visiting Rome there are some attractions, you just can’t miss it. If you don’t plan to visit Vatican, Sistine Chapel and St.Peters church, it means you haven’t been in Rome 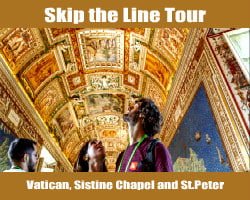 You can say the same for Milan’s most famous mural, Leonardo da Vincis The Last Supper. Hidden away on a wall of the refectory adjoining the Basilica di Santa Maria delle Grazie, depicts Christ and his disciples at the dramatic moment when Christ reveals he’s aware of his treachery. It was painted between 1495 and 1498

The Milan tourist attractions itinerary could only start from here, one of Leonardo’s most famous works, comparable only to the Gioconda ( Monna Lisa). 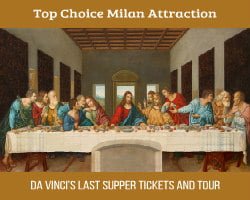 The fresco is a masterpiece of the Italian Renaissance, in particular for the use of perspective, able to give depth to the wall, and for the extraordinary ability of the artist to interpret the different personalities of the apostles.

Centuries of damage have left the mural in a fragile state despite 22 years of restoration, which was completed in 1999. To see it you must book in advance or sign up for a guided city tour.

Brera is an elite Milan district, the center of Italian design and creative development, commercial and cultural center of Milan. If you are looking for a peaceful corner far from the busy city bustle, this Milan area is a right place. 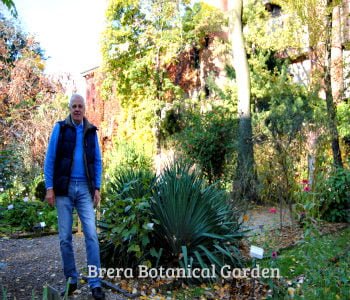 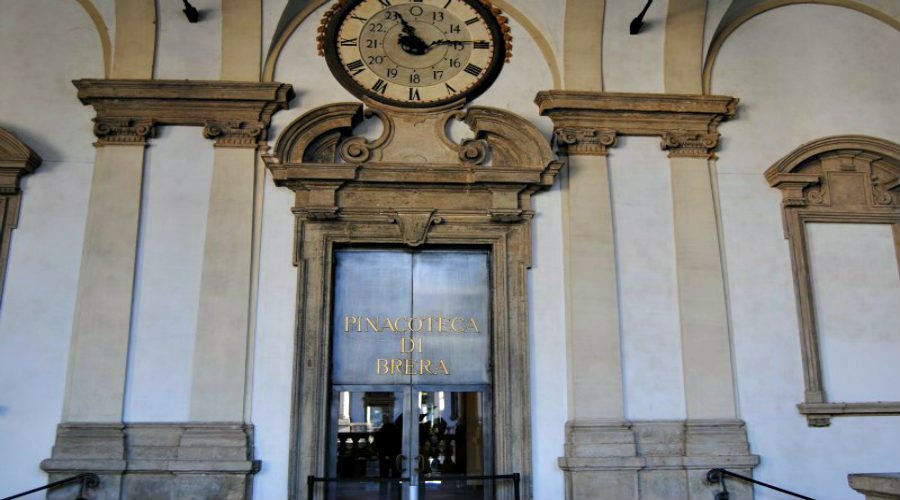 The Pinacoteca gallery hosts one of the most important art collections of Italy, with paintings of artists of XII to XX century such as Rafael, Mantegna, Piero della Francesca and Caravaggio.

The gallery is housed in the baroque building, erected on the site of a fourteenth-century convent, rebuilt by the Jesuits in the seventeenth century. 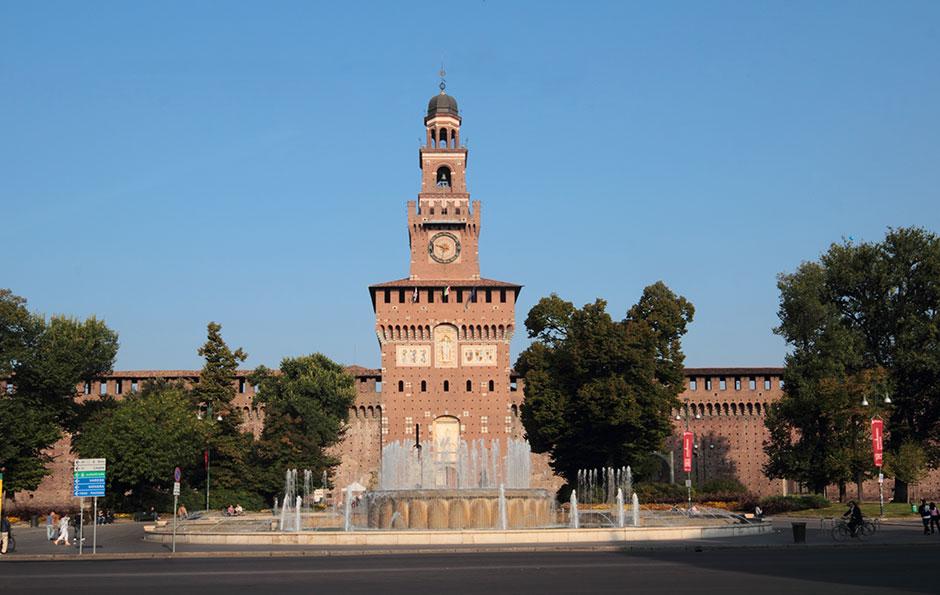 Sforza Castle (Milan castle) is one of the renowned Milan tourist attractions. This symbol of Milan, built by Francesco Sforza in the fifteenth century, is now a compulsory stopover for those visiting Milan. 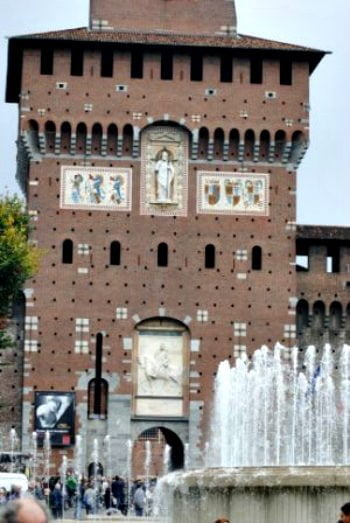 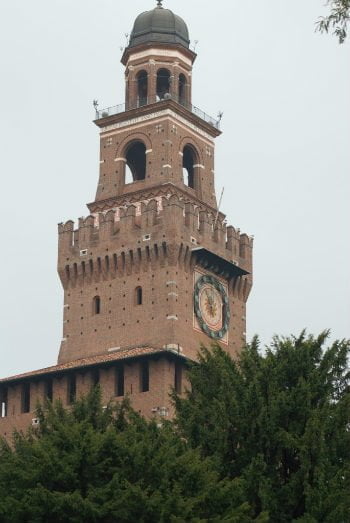 With over 8 museums inside the castle, open from Monday to Sunday from 7 AM to 7.30 PM, in combination with beautiful Sempione park in his background, is an ideal place for a day tour. 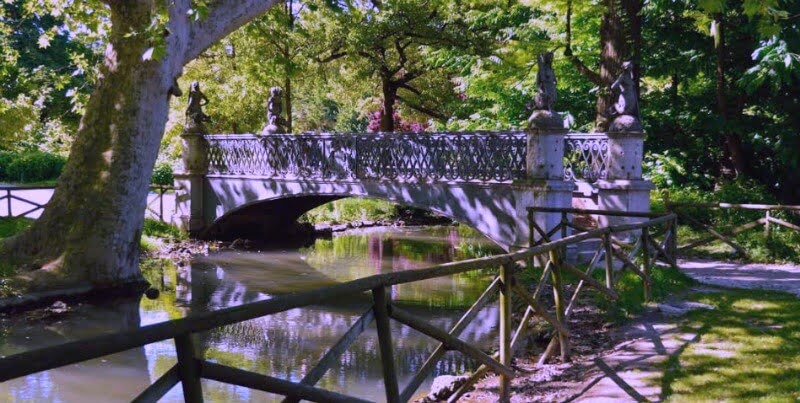 This second largest park in Milan, located in the background of Sforza Castle, designed by architect Emilio Alemagna in the English landscape tradition, with winding trails, bridges and a small lake is one of the most peaceful venues in Milan.

Parco Sempione is certainly one of the most famous and beloved places among Milan tourist attractions. Besides being one of the main green areas of the city center, it is also very important from a historical and cultural point of view. .

Walking among its centuries-old trees and its waterways, you’ll come across some particular city landmarks that deserve to be visited:

Triennale di Milano is an international institution which since 1933 housed in the Palazzo dell’Arte (Art Palace) inside the park organizes exhibitions and events about arts, designs, architecture, fashion, cinema, photography and theater.

La Triennale di Milano is a right place to hang out couple of hours. After you’ve visited the rich expositions, take a brake at Triennale’s cafe overlooking Parco Sempione. Take a cake stop or a relaxed aperitif between iconic design chairs or enjoy the panoramic restaurant Triennale terrace for a dinner with a view. 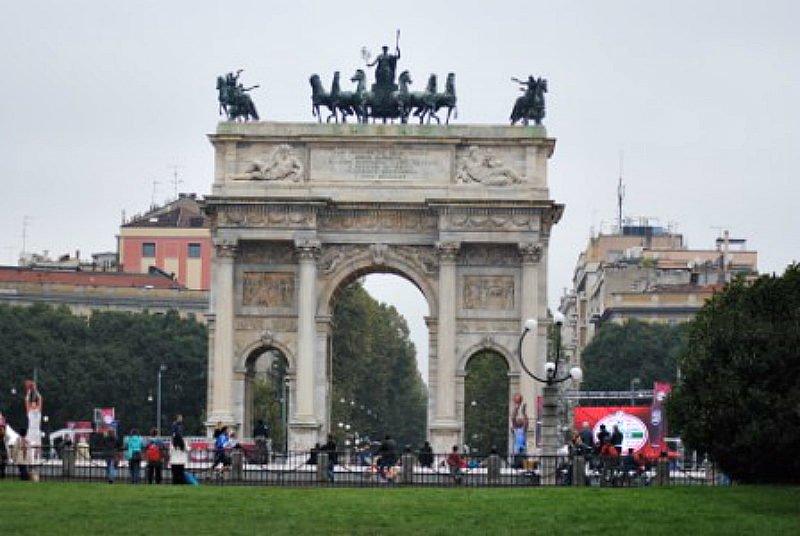 One of the Milan tourist attractions is this arch, situated at the northwestern edge of Parco Sempione. This Napoleon’s 25 meters high triumphal arch, marks the start of Corso Sempione, the main road that used to connect Milan to Paris via the Simplon (Sempione) Pass.

The Arco della Pace (Peace Arch) is without a doubt one of the major neoclassical monuments of Milan. The first arch was erected in 1806. Ironically, thanks to Napoleon’s fall in 1814, its neoclassical facade was finished in 1838.

Although it was initially built to celebrate Napoleon’s victories, on some reliefs you can notice some scenes from the Battle of Leipzig (1813), depicting his defeat.

Check the map below with all main Milan tourist attractions!

Here are the top points of interest!

Want toshare this page on Pinterest? Pin it below! 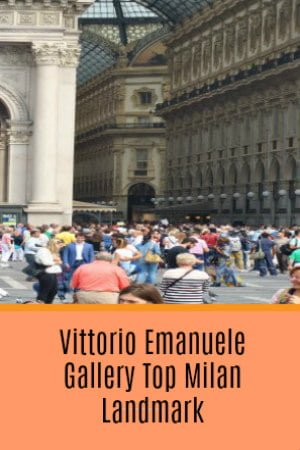 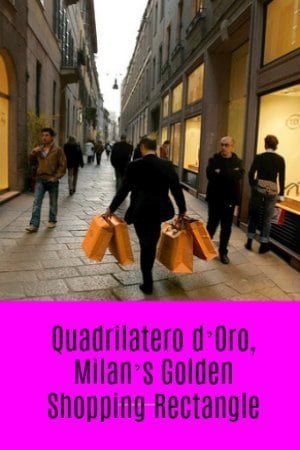