If you are planning to visit Milan, your first thought might be: Is Milan safe city? Generally speaking, Milan is safe for visitors on par with most European big cities.

My first and most important advice is, when you travel use common sense and keep your eyes open wherever you are. Don’t trust too much on crime statistics on any city you are traveling to. Milan is relatively a big city and it’s very safe according American standards.

Staying safe overseas is a big concern for those who travel, especially in these times when we are witnessing increased terrorism. Fortunately neither Milan nor Italy so far didn’t face this problem.

This my personal review of Milan safety, based on my modest experience living in this cosmopolitan city, without intention to present Milan in a bad light. I’m not going to alarm you in any way with excessive or unconfirmed security issues that could compromise your pleasant stay in Milan.

Is Milan Safe According Safety Reports

I wouldn’t bother too much about official safety reports as in that case you would probably stay home. Milan is safe but your common sense is the best way to stay safe in Milan.

Here are some basic safety tips you should follow in Milan:

Almost anywhere in the world, large railway stations are dangerous. Large numbers of travelers, mostly for first time on this huge station are ideal customers for petty thieves like pickpocket. Milan Grand station is perfect place for this.

Definitely avoid this place during the night but even during the day you’ll see drunk immigrants, homeless people and drug dealers. If you have to take a night train, get the metro to get to the station. You can walk directly into the main hall of the railway station, passing through well-lighted areas, as there are always people around.

Don’t leave your personal luggage unattended in the place like Milan Central Station. Even if there are a lot of policemen present all the day long, the minimal distraction and your bags will be target for theft.

Is Milan safe for a solo traveler?

During the day it’s very safe. At night, I would stick to well well-lighted and populated areas if you are alone. This particularly concerns female travelers. If you are looking for nightlife places in the evenings you’d better stay in the Brera or in the Navigli districts, not so much for a safety issue but rather because it’s where all the nightlife is.

Don’t get drunk (it’s valid only for female traveler). Having a social drink is the norm for Milan, known as born for aperitif (aperitivo), but getting drunk will be a potential danger.

The Good And Bad Quarters Of Milan

Is Milan safe throughout the whole urban territory? Milan like every city in the world has it’s good, best and the worst areas according to life and work conditions. Also from the tourist point there are less recommended areas and so called highly safe quarters

For the best city areas I intend the areas where you can walk around without worries and where you can find all kinds of services from restaurants, supermarkets, entertainment and most important city highlights. But keep in mind the gulden rule ‘use common sense’ as there is no 100 % secure place.

Milan city center concentrated around the Duomo, the huge Gothic cathedral, better known as Piazza del Duomo, with numerous art galleries, museums, the Scala Opera and shopping complex in the area, is to be considered, the safest.

Piazza del Duomo warnings: pickpockets and scammers are present in this highly tourist visited piazza. Be aware of

‘ree’corn to feed pigeon’ scam, scams like ‘a wristband around your hand’ unless you will pay 20 € to remove it. Do not fall into the trap baying counterfeit luxury goods from street vendors (you risk to be fined up to 300 €.

Sempione Park – A nice place to be there but during the night it’s not recommended to sneak around this enormous park. During the evening nearby Corso Sempione is ‘to be seen place’, as people come to have a drink in the different fancy bars. 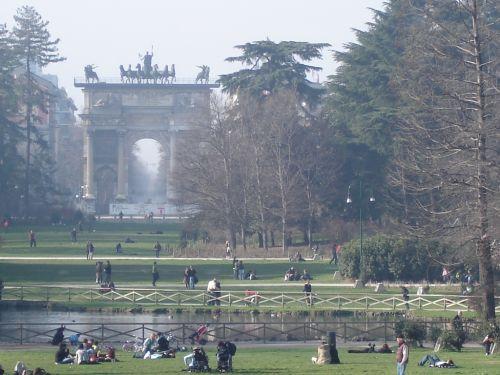 Sempione Park one of the safest places to enjoy Milan

Few simple steps to safeguard yourself

I do hope this page will help to answer the question – Is Milan safe?. Personally from my experience I would say that Milan takes rather high level on the scale of tourist security.

Milan Things to Do