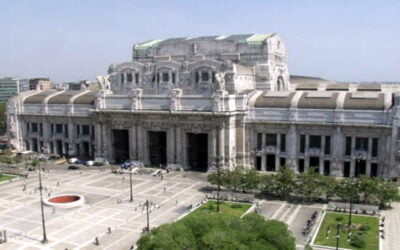 Whenever you decide to travel from/to Milan by train, Milano Centrale aka Milan Central Raiway Station, will be for you an inevitable point of reference. More than 90% of all trains leave or arrive here.

This impressive building of enormous dimensions is easy to find. It’s situated in Piazza Duca d’Aosta, 1. It looks really too large and sometimes intimidating for first time train travelers.

It was inaugurated first time in 1931 to replace the old central station built at where is today Piazza della Repubblica. It’s a typical authoritarian building from Mussolini period with bombastic sculptures of muscular animals from mythology: winged horses, lions, bulls and eagles, symbolizing strength and authority. For more about the station’s history see – Wikipedia Milan Central Station.

Here’s what you’ll find on this page:

The Milano Central station is the most important railway hub of the Lombardy region and the second in Italy, after Rome station with almost 120 million passengers every year.Every day more than 800 trains arrive and depart starting from regional, regional fast, intercity, national and international high-speed trains operated by Trenitalia and Italo, train companies.

This station is also an important crossroad of all airport transfer services from main Milan airports from Malpensa, Linate and Bergamo airport.

How to find your train binary

This huge train station has 24 train binaries (platforms). All train platforms with a spacious public space are above ground level, very conveniently connected with lifts and escalator down to ground level in case you don’t want to use the normal staircases down to the station’s main entrance on the Piazza Duca d’Aosta. In any case the handling of all kinds of suitcases is really easy for passengers.

All train platforms (24) are numbered from left to right as you look towards the trains and each number clearly indicates the train in question. Before you enter the platforms area, big departure boards shows which platform each train leaves from and there are clear train departure indicators on each platform.

Milano Centrale – where to eat&drink

While waiting for your train, Central Station offers a great choice of restaurants, coffee bars and supermarkets.

Some of most recommended are:

Hotels near the station

There are lots of hotels near Milan Centrale station if you need to stay overnight between trains.

If you are traveling on budget there are some nice and relatively cheap B&B in close vicinity of Central Station.

If you are traveling in a group of people or as a family, some apartments and suites properties could be a good choice to spend a night there. I suggest:

If you are on a business trip, some very good hotels are a right place for you. My choice falls on cozy:

Travelers with special needs such as luxury hotels, will not be disappointed if they chose Excelsior Gallia Luxury Hotel Centrale, just across the street. A luxury in a great style.

Milan Central Train Station has excellent bus connections with all Milan’s airports. All bus transfers from principal airports have their arrival and departure bus stations on the both external sides of impressive Centrale train station building.

Looking at the station’s main entrance on the Piazza Duca d’Aosta , on its right side on Piazza Luigi Savoia, there are bus stops of following airport transfer company:

On the right side of the building – Piazza Luigi Savoia

On the left side of the building – Piazza IV November