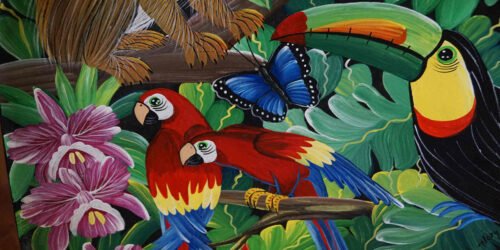 With more monkeys than people, Costa Rica offers eco-friendly tourism from volcanoes and rain forests, to gorgeous, resort-worthy beaches. Whether you’re a nature lover, adventure seeker, or eco-tourism enthusiast, there’s something for everyone in Costa Rica.

Below you find information on where to go, what to see, how to get around, and what not to miss when visiting Costa this gem of Central America.

Costa Rica is split into seven provinces. Most of the tourism, however, centers around its beaches along the Pacific Ocean in Guanacaste and Puntarenas, and by the Caribbean Sea in the province of Limon.

While the capital city of San Jose and its shopping suburbs of Escazu is the most populated, these are places you’ll generally only visit while entering and leaving the country.

Visits to the cloud forest in Monteverde, which extends to the most northern part of Puntarenas, generally coincide with crossing into the province of Alajuela, to see the famous Arenal Volcano.

If you’re looking for a place that truly offers the beaten path, the Osa Peninsula in southeastern Puntarenas, as well as, the well-hidden Tortuguero in northern Limon offers up the finest nature experiences that Costa Rica has to offer.

There are typically two main seasons in Costa Rica, which are aptly labeled dry season and green season.

From December through April you’ll find the best weather in Costa Rica. During this time in Northern Guanacaste, you’ll hardly see a cloud in the sky, and the weather forecast simply runs on repeat.

The province of Limon to the east however can experience a bit of rain during this time, but in general, most of the time you’ll be under a blue sky.

No matter what time of year though, rain always falls in the cloud forests of Monteverde and around the Volcano in Arenal, so you’ll also find it be green, year-round.

The price to visit is much higher during the dry season, and you’ll have to trek into the interior to see the greener side of Costa Rica.

The months from May to November are when you’ll see the diverse plant life of Costa Rica comes out to play. The term green season is not just a nice way of saying wet or rainy season, the entire Costa Rica simply changes colors once the dry season is over.

After months of relentless sunshine, the yellow grasses of the dry season will morph into lush vegetation. What seemed barren during the dry season, turns into a green oasis, and from May onward, forests will seem to grow right before your eyes.

Typically from May through September, you can find the morning still to be quite sunny for the beach, but from the mid-to-late afternoon and through the evening, clouds will start to roll in and rain is more prevalent.

In October and November, you’ll find it rain most days, but you’ll also be amazed at the spectrum of green that has seemingly spread to every single corner of the country.

If you’re a beach bum, then it’s best to get there early during the green season, as even if it’s not raining, clouds are likely to form overhead at some point. While the rain can be inconvenient, at times it can also be a nice break from the humidity that the clouds bring on.

The drive time between many tourist destinations in Costa Rica is roughly about 4 hours, which makes renting a car the easiest way to get around. Although the roads are getting better and better, an SUV (from $50 USD per day) is recommended if you’re looking to go anywhere off the beaten path.

Small shuttle buses also offer door-to-door transfer services from one destination to the next and can be an economical way to travel quickly in comfort. Prices range from $30-$60 for a 2-5 hour trip. If you plan on staying a few days in each location, this is a decent option.

Public buses that run along the major highways (Liberia to Tamarindo or Playas del Coco, San Jose to Manuel Antonio or Puerto Viejo) can be both cheap and comfortable coaches, but when visiting smaller and less traveled destinations where the roads are still made of dirt, you might be boarding a school bus.

Costa Rica has a diverse landscape that is full of environmental wonders from active volcanoes and cloud forests to a never ending supply of hidden waterfalls. Hiking and visiting national parks to see the most scenic views is simply a must nowhere which province you stay in.

Beauty exists in many places off-land as well with diving tours from Playas del Coco being quite popular and many other things to do nearby like adventure parks and deep sea fishing.

No matter where you are in the country, tourist activities are either nearby or within a short shuttle ride away.

A lot of towns in Guanacaste and south of San Jose near Jaco have a large number of condo communities where visitors simply rent them over hotels. The condo rentals in Playas del Coco make up 75% of the entire town and outnumber the hotels by 100:1 ratio.

There are also some decent resorts in and around the Papagayo, which include the Riu Guanacaste, Four Seasons and Secrets.

When visiting Costa Rica for the first time you’ll need to know some of the basics, to ensure your experience matching your expectations.

While you can get by with English in most tourist-driven establishments, Spanish is the main language spoken in Costa Rica. The more words you learn to speak before your arrival, the more smiles you’ll receive from the locals for your efforts, and the richer your experience will become.

The national currency in Costa Rica is the Colon (CRC), but you’ll find pricing to revolve around the US dollar, which is also generally accepted in many places.

When converting money outside of a bank, however, local establishments will round down (1 USD = 600 colones) when exchanging.

Most hotels, restaurants, and brand name stores will accept credit cards, but smaller shops, markets, and budget hotels will only deal in cash, and it’s best to have Colones on hand rather than pay inflated USD prices.

Debit transactions in Costa Rica can be tricky as they depend on the merchant account of the proprietor. In general, as long as your debit card has an Interact or Cirrus symbol and is not from an obscure bank, you can take cash out of almost any ATM.

If you’re having, try visiting a different bank, as each one will have different cards to can and cannot accept.

The electric sockets in Costa Rica are 120 V, 60Hz. These are the same Type B (two pins, with a ground) as you’ll find anywhere else in North America. In some bathrooms or older hotels, however, you might only find Type A outlets which also have two-prong, but no ground. So, shavers and blow dryers will generally still work, but you won’t be able to plug in a laptop.

Costa Rica is generally considered a very safe country. Petty crime however still does exist, so you’ll have to wary of pick-pockets, especially in San Jose.

Keep a vigilant eye (and hand) on your luggage at bus stations. If you’re wanting to sleep on a bus, it’s best to keep your carry-on with you, rather than stow it away in the above compartment.

Cars left at remote beaches/waterfalls have been known to be broken into, so be sure to double-check when locking your doors and don’t leave anything visible that looks enticing.

Where possible, leave your valuables in the hotel safe, and keep your expensive phone hidden in places you feel eyes upon you.