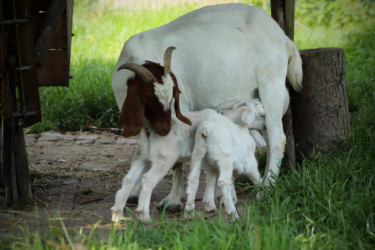 While there are no real zoos in Ibiza there are two small animal parks (Cam Munson, es Puig de Can Maymó) where you see and feed some farm favorites, like rabbits, goats, and pigs.

Even though the options in Ibiza are more country quaint than city big, they do offer a nice thing to do with kids when visiting the island.

While mostly known as an ecological farm and a great place for smoothies, fresh eggs, homegrown fruits, and vegetables; they also have an animal feeding area.

For 6€, you’ll be provided with food to feed the farm animals which include rabbits, goats, pigs, and turkeys. At times they also offer pony rides too.

Below you can see photos of the goat feeding area at Finca Can Munson.

Adjacent to the Bodega Can Maymo you find their small animal farm that includes miniature pigs, goats, and birds such as peacocks, pheasants along with various other small birds.

You can find both Cam Munson and es Puig de Can Maymó on the map below, along with the top attractions and things to do in Ibiza.

Below you’ll find answers to frequently asked questions about zoos and animal parks in Ibiza.

Are there any petting farms in Ibiza, Spain?

Yes. There are two small animal farms called Cam Munson in Santa Eulia del Rio and Puig de Can Maymo near Sant Mateu d’Albarca that have an assortment of goats, pigs, and rabbits that you can pay to feed.

Are there any animal parks in Ibiza, Spain?

No, not really. There are, however, two small animal farms called Cam Munson in Santa Eulia del Rio and Puig de Can Maymo near Sant Mateu d’Albarca which are wineries with animal areas.

Are there any zoos in Ibiza, Spain?

No, the closest one is in Majorca. But, there are two small animal farms on winery bodega grounds called Cam Munson in Santa Eulia del Rio and Puig de Can Maymo near Sant Mateu d’Albarca where you can feed goats, pigs, and rabbits.