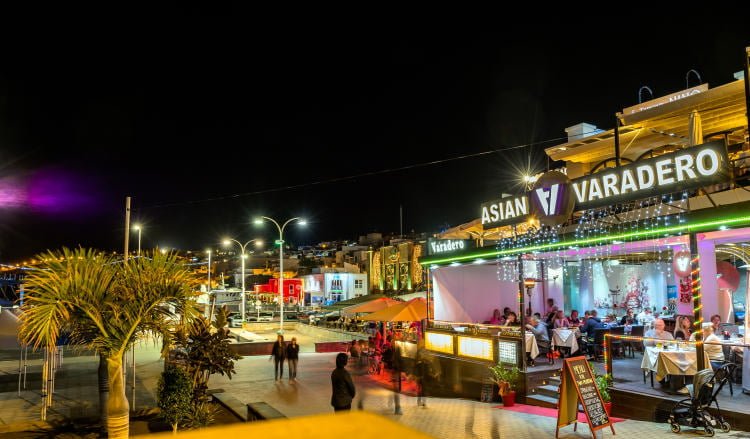 Almost all the nightlife in Puerto del Carmen can be found along Avenida de las Playas or very close to it. The stretch from Old Town Harbour through Playa Grande up until Punta El Barranquilla accounts for roughly 90% of the party options in PDC.

From there on you won’t find mind much until you get closer to Playa Matagorda. A decent cluster of pubs and cocktail bars can be found on both ends of the beach, but the selection pales in comparison to the heart of Avenida de las Playas.

As you can see on the interactive map below, most of the nightlife is focused very close to the ocean. It starts at the harborfront, the moves along Playa Grande, then up to Los Pocillos and Matagorda.

The Lanzarote Palace is near the harbor and doesn’t close until 6 am. The Ibiza Disco is near the tourism kiosk at Playa Grande… but is Ibiza in name only.

Aside from that, there’s not much going on in town. A lot of discos tend to open and close rather quickly in PDC, but Arrecife is but a short taxi ride and offers a greater selection.

Ruta 66 is an American theme bar that plays 80s/90s music and is probably the most popular of all drinking establishments in Puerto del Carmen.

Africa Bar has an African safari theme, as well as some of the best live music on the island. Both options are located on the eastern end of Playa Grande and in easy walking distance of each other.

While not really a themed bar per say, the Gran Casino de Lanzarote can get quite busy in the evening and has reasonably priced drinks.

The Musical Hall Tavern is the most famous diner and shows bar in town and is also the most popular in all of the Lanzarote for drag queen shows.

Basseys and Betty Boops are the two other options which are drag show related but on a smaller scale. Betty Boops also has karaoke following the show.

Oceans Royale is unique in the fact that their dinner and show has a vegas cabaret theme.

Tequila Lounge and Africa Bar (playa grande), as well as Electric Island (harbor) are incredibly popular. At Playa Matagorda, Marcos & Aless Bar and Rockolla are well-known, while the latter hots The Ska Duo on Sunday nights and is well worth the trip.

Almost every Irish or Scottish pub in PDC also offers live music with some sort of house band or solitary singer. Around the harbor, that’s The Scotch Corner Bar, Mulligans, Craic and Ceol, Dicey Reillys and The Irish Harbour Bar.

Along Avenida de las Playas through Playa Grande, there’s Brian Boru, Murphy’s, and The Irish Viking. At the end of the beach and heading towards Los Pocillos, you’ll find Maguires, The Dubliner and Ned Kelly’s.

O’ Briens (playa grande) and Rockola (matagorda) both offer live music on top of karaoke, while Betty Boops has karaoke after their drag show.

The best cocktail bars are sandwiched in between Playa Grande and Playa Los Pocillos. La Delicatezza and Golden Corner are the heavy favorites with Diamond, La Gruta trailing behind. While a couple of streets back from Avenida de las Playas, Bogarts Bar is a fairly unique option, while RockaDilly, California and Hawaïan Bar round out the rest.

At the harborfront, Heineken Bar reigns supreme while Skyy is fairly trendy and also doubles as a shisha bar. Cerveceria San Miguel has a decent selection of cocktails and beers.

Behind Playa Grande, Óleo is a fast-rising star that not only has great cocktails but is a highly-regard beer garden and tapas bar.

On the far end of Playa Los Picollos you’ll find the Corner Cafe, Horizonte and then at Playa Matagorda is Ocean’s, which is top-notch.

The top beach bars usually have decent cocktails too with the Chiringuito Beach Terrace at Playa Grande getting rave reviews.

At the harbor side of Playa Grande, you’ll find Vino+ La Tienda which is a tapas bar/wine store, so the selection is quite extensive.

The Irish dominate the pub scene in Puerto del Carmen and make it one of the best places to watch the St. Patrick’s Day Parade in Lanzarote. There are English and Scottish options too, and in general, the pubs in PDC also double as sports bars with a UK flavor.

A lot of options can be found near the harbor and aside from the Irish pubs with live music listed above, The Purple Turtle, Irish Rover, Slattery’s, Highlander Too,Hogan Stand, as well as, The Dog and Duck, Tipplers and The Rock Inn.

Inbetween Playa Grande and Playa Los Pocillos, most of the pubs have ocean views with The Galleon 2 being the most popular. Other options include The Bucket List Bar, Bar Adelante, the Owl & Pussycat Inn, and the Cock & Bull.

At the end of Playa Los Pocillos, you’ll find another popular pub in The GuinnessTavern. At Playa Matagorda, The Auld Triangle is a great spot, plus there’s also Peggy’s Snug, and Decky Dillon’s.

Bingo nights at the Highlander Too near the harbor are quite popular. They also have family games, along with live music on Thursday afternoons from 3-5 pm.

Three bingo bars, Topgun Bar, Why Not, and The Hot Spot are sandwiched in between Playa Grande and Playa Los Pocillos.

Sunset Beach at Playa Grande has trivia night and is a great beach bar to boot.

The aforementioned bingo bars, Topgun Bar, Why Not, The Hot Spot, and the Owl & Pussycat Inn all have quiz nights too.

Holes in the Wall

Sometimes, these like snug spots are all you need to have a good time. The Tiny Bar near Playa Grande offers a sweet ocean view while O’Connells Dug Out is a teensy Irish pub that doubles as an intense little sports bar.

Linekers and Gallagher’s Beachview are decent options right in front of Playa Grande, while Arthur’s Bar near Playa Los Pocillos is has a nice menu too.

Near the harbor, there’s Thomas ECK, while The Sportsman Bar is at Playa Matagorda.

Most pubs in PDC also have TVs tuned into UK sports, as do some of the bar & grills.

Along Playa Grande, you’ll find a bunch of options with Sunset Beach,Shenanigans, Chiringuito, The Galleon Inn and The Tavern on the Seafront.

On the way to Playa Los Pocillos, there are a couple of decent bars with ocean views in Ancala2 and The Venue.

At the end of Playa Los Pocillos, there’s Paddy’s Paradise and O’Sheas Bar while the Aussie’s Beach Bar at Playa Matagorda is an island favorite.

The Sugar Lounge Terrace near the harbor offers a sunny rooftop with lots of spots to lounge and enjoy the ocean view.

Most of the top beach bars and pubs also have great grills but these selections best fit the category.

Near the harbor, you’ll one of the best grills in PDC at The Drunken Monkey, along with the Hatton Garden Bar which has an outdoor pool table.

The Snug Bar is a street back from Playa Grande and is a little hole-in-the-wall with outdoor seating and is right beside The Rendezvous Bar.

In between Playa Grande and Playa Los Pocillos you’ll find the three places, Topgun Bar, Why Not, and The Hot Spot, all of which have bingo and quiz nights.

Skyy, found near the harbor is a trendy place that also has great cocktails.

You can find answers to all of our frequently asked questions about the nightlife in Puerto del Carmen below.

Are there any British pubs or bars in Puerto del Carmen, Lanzarote?

Yes, there are several British pubs which include the Purple Turtle, The Galleon Inn, Arthur’s Bar, Topgun Bar, and The Owl and Pussycat Inn.

Where can I smoke a shisha pipe in Puerto del Carmen, Lanzarote?

Near the Old Town Harbour there’s a trendy cocktail lounge called Skyy that has shisha pipes, and a great drink menu too.

Are there any Scottish pubs or bars in Puerto del Carmen, Lanzarote?

Yes, the Scotch Corner Bar and Bluebells are the most popular Scottish pubs, along with Highlander Too.

Where can I play trivia or have a quiz night in Puerto del Carmen, Lanzarote?

If you’re staying near Playa Grande, Sunset Beach has a trivia night and is a wonderful beach bar too. You can also find quiz nights at Topgun Bar, Why Not Bar, The Hot Spot, and the Owl & Pussycat Inn. Many of these places also have a bingo night too.

Yes, the nightlife in Puerto del Carmen is some of the best in the Canary Islands with roughly 100 party options along Avenida de las Playas alone. Aside from the general assortment of clubs, pubs, bar and grills, there’s a good live music scene, a ton of beach bars, and several sports bars.

The theme bars, show bars, and karaoke bars are also quite popular, along with the beer gardens, wine bars, and cocktail lounges. There’s also the Gran Casino which is open late.

Where can I find the best nightlife in Puerto del Carmen, Lanzarote?

You’ll find 90% of the Puerto del Carmen’s nightlife along Avenida de las Playas with the largest concentrations around the Old Town Harbour and Playa Grande. You’ll also find pockets of nightlife around the Gran Casino and at the far end of Playa Matagorda near the airport.

The clubs, theme bars, and pubs, bar and with live music tend to be the ones that stay open late.

Are there any Irish pubs or bars in Puerto del Carmen, Lanzarote?

Yes, there are more Irish pubs in Puerto del Carmen than you can shake a leprechaun at with whole town drinking green beer when the St. Patrick’s Day Parade comes to town.

Where can I play bingo in Puerto del Carmen, Lanzarote?

You can find bingo nights at the The Hot Spot, Topgun Bar, Why Not Bar, Highlander Too, and the Owl & Pussycat Inn. Many of these places also have a trivia night too.

What is the nightlife like in Puerto del Carmen, Lanzarote?

There is no better word than lively to describe the Puerto del Carmen nightlife. The beach bars and theme bars, like Bikers Club, Ruta 66, and Africa Bar, along with the cocktail lounges and wine bars are the best in Lanzarote.

There are two show bars too, and most pubs in town either have live music, karaoke, bingo, or trivia. On top of that, there are numerous sports bars, as well, as a few beer gardens, and shisha bars. You can even hit the casino, which is always open late.

link to COVID-19 Tourism in Istanbul

If you're visiting Istanbul or Turkey during COVID-19, you'll need to know all the current coronavirus measures, travel restrictions, advisories, and statistics. Safe tourism practices and a COVID...

Tenerife tourism is split between Costa Adeje, Playa de Las Americas and Los Cristianos in the south, and Santa Cruz and Puerto de La Cruz in the north. In between, there is over 350 km of diverse...