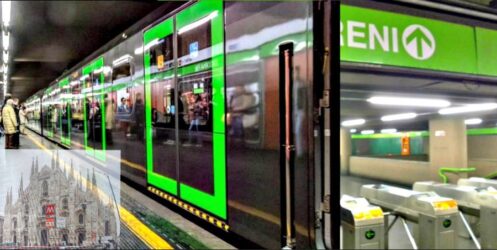 I’m not exaggerating considering Milan metro as a service of excellence on the Milan city transportation network. Most cities in Italy don’t have metro systems but only few (Rome isn’t one of them) can be proud of so efficient way to get around a city, like Milan.

I love Milan subway systems, not only because it’s the cheapest and the fastest way to get around a city but definitely the only way to get from one sightseeing point to another. It’s the popular means of public transportation in Milan used by the majority of locals but also more and more by Milan city visitors.

Milan subway network with its four lines (with fifth under construction) can be rather intimidating and quite unfamiliar particularly if you aren’t used to riding underground. Although Milan’s city network covers almost all parts of the city, sometimes it’s necessary to use the combination of transportation means, like a tram or bus.

In order to help to understand how to use it, let’s see how Milan’s underground works and what it consists of. Officially metro system is covered by four lines fully functional while the fifth (called blue line is under construction). It’s 96,9 km long with average daily 1.500.000 passengers.

Below are four underground lines indicated by numbers and corresponding colors (red, green, yellow and lilac). Each of these lines will be represented by maps including those found in Milan metro maps.

To addition to four metro lines, Milan has a railway loop (in Italian ‘passante ferroviario‘) that is an almost entirely underground system (called Lines S) that crosses Milan with 5 lines called “suburban lines” connecting the hinterland area of Milan and the city center. Actually there are 13 S lines

M1, called redM is one of the most important metro lines that covers the principal city tourist highlights.

It’s the oldest line built in 1964. It’s 27 km long that connects the city from north-east to west. It is divided into two branches from Sesto 1° Maggio to Rho Fiera (Fair Ground) and to Bisceglie with two urban limits sections.

M2, called green is the longest line inside the metro system. It was built in 1969. It’s 39,4 km long. This line has two branches on both sides of the line.

These are Abbiategrasso and Assago Milanofiori Forum on the south and Gessate and Cologno Nord. As line M1 this one also has urban limits sections.

M3, called yellow is one of the newest metro lines whose construction was inaugurated in 1990 and finished in 2011.

It’s only 17 km long. It’s a semi-automatic line as the driver controls only the opening or closing of the doors and the departure of the train. This line connects two important city points, Stazione Centrale and Piazza Duomo.

M4, will be called the Blue Line.

It’s 16 km long and it was inaugurated in 2015. Connects the northern part of the city with 19 station from Bignami street all the way to famous football stadium San Siro, the temple of Milan and Inter clubs.

With four active metro lines and numerous stations, it’s almost impossible for first time visitors to guess where to find a right metro station near to their hotel or which line goes to their favorite destinations. Here are essential things you should do first:

For first time visitors here are the most important metro stations:

There is an old saying, ‘all roads lead to the Duomo’. This is the only place that every visitors will be visiting.

Only few metro station names are the same as the attraction you want to see. Duomo is the only one.

There are two lines that lead to Duomo Cathedral, M1 (red) and M3 (yellow). If you are looking for accommodation near Duomo metro station, here are some hotels close to Piazza Duomo.

If you reach Milan by train or by schedule bus from Malpensa or Linate airports, this metro stop will be probably your first Milan underground experience.

Near this metro station you can find many accommodation offers from low budget hotels to luxury ones.

Cadorna metro station is one of the most important Metro junctions reachable by Green and Red lines.

If you decide to visit Castello Sforzesco (Fortress) you can take Red (M1) or Green (M2) line. Cadorna Metro is also important to reach Como Lake and Malpensa Airport by Malpensa Express trains to Terminal 1 and 2.

Staying in one of hotels near this metro station, you can easily reach important city sights and city districts like Brera. From here Duomo is only two metro (M1) stations away.

Most good tour guidebooks will include this information, but a city map that includes Metro stops will also be a good resource to figure this out.

Among other station, there are few that deserve to be mentioned according to the activities you have in mind, , for example:

The most important is to have a good Milan metro map. You can buy one folding pocket size travel map online that beside city center street map of Milan, has an integrated Milan metro map including lines and stations.

Whenever you decide to move around the city using Milan metro, an extended transportation service, I’d like to indicate some useful tips not to get lost in the various stations and reach your destination.

The first thing you have to have to, is to buy your metro ticket. You’ll find here all about how and where to buy one but also all types of tickets and how to validate your ticket.

Once you enter the metro station and after you validate your ticket, try to remember the name of the station you’ve entered. Each station has two lines, most of them are on the lower level of the station you are traveling from.

Before going down to the metro lines, check which one takes you in your chosen direction. Usually you will find the map located on both entrances to the lanes. Let’s see an example of Milan metro:

Attention: from February 15th 2016, in all the Milan metro lines, the validation of the ticket is compulsory both in and out of the turnstiles (entrance and exit). So another good reason not to lose your ticket and keep it for the exit.