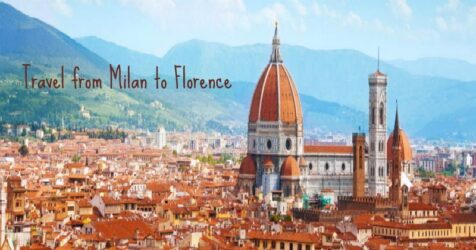 If you decide to travel from Milan to Florence after you spend a day or two in Milan city, I’ve prepared a short and comprehensive guide how to find the best and quickest solutions.

The distance between this cities is approximately 318 KM. It doesn’t seem a long distance to the first sight. But things change when one has to decided, by what means of transport to travel. All means of transport are available, except by air, as there are no commercial flights.

They are several ways how to travel between two cities. It all depends how much time you have available. From my personal experience, traveling by car only apparently looks the fastest but sometimes it can be time-consuming and certainly not the cheapest

Unfortunately traveling by car it can take over 5 hours in high season (July and August) as the highway A1 that links Milan and Florence, happens to be jammed up at the crossroads between A1 and A14 (Adriatic highway), before you proceed on E35 all the way to Florence.

It isn’t my intention to discourage you from using a car but there are much more quicker and safer ways to reach Florence, the cradle of Renaissance from Milan

What does it mean to best way? For some travelers, the question of time is the most important. For others it’s a question of costs and somebody is looking for more comfortable way of traveling, ignoring one euro / dollar more or less.

You can not go wrong if traveling by train is your choice. With up to 60 trains a day on that route, it won’t be difficult to find one that suits to any traveler. Most trains are direct and rarely require transfers in Bologna or Prato before arriving in Florence.

Depending of type of train, it takes between 1:39 h and 4 hours to arrive in Florence ( depends of chosen service and if a transfer is required)

All trains between two cities are run by either Trenitalia and Italo.

Book the cheapest tickets on trains between two cities

Book your train to Florence from Malpensa Mxp

Traveling by bus is definitely the cheapest way to get from Milan to Florence but also the slowest. Below are general information about bus travel: